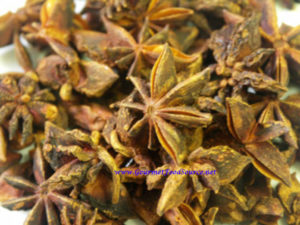 One of the oldest spices known, anise is an annual plant found in Egypt and the Mediterranean and is widely used in the regions cooking. The yellow flowering heads produce the fruit, which is dried and known as aniseed. Aside from its culinary uses anise has long been considered a powerful aphrodisiac and aniseed oil is used in a number of commercial ways from soaps and perfumes to toothpastes, tobacco and even as the scent on the artificial rabbit in greyhound racing! The strong flavor of anise can also be found in alcoholic beverages from the French pastis to the Greek ouzo as well as non-alcoholic digestion aids.

Not actually related to anise at all, these beautiful star shaped pods come from a bush native to China and South East Asia known as illicium verum. Similar in taste to anise, star anise is an important ingredient in Chinese cookery and is one part of Chinese five-spice powder. Along with spices such as cinnamon and cassia, it plays a vital role in Chinese red braises of pork and duck. Use in small amounts, it is best left whole and crushed as required or simply left whole, star anise keeps well in a cool, dry place.