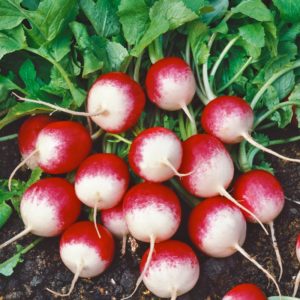 Of all the salad vegetables I think radish might be my favorite. They just stand out in the crowd, when you have no choice but to buy supermarket salads and the tomatoes taste the same as the cucumber, the cress has no flavor and the spring onions have no bite you can still rely on the radish to give your salad a punch. I don’t bother slicing them, I can’t wait that long.

Radishes are a close relative of the cabbage and have been cultivated for centuries beginning with the black radish and then the long white variety around the seventeenth century. It wasn’t until the eighteenth century that the now common round red radish was cultivated on a large scale.

The Chinese and Japanese tend to treat the radish with greater culinary respect than we in the West, the long white radish in particular plays an important part (both cooked and raw) in their cuisine. That said, I remember seeing the long white radish or mooli as it is also known used to great effect in salads during my training in Germany and Switzerland where it is grated and tossed in basic mustard vinaigrette.

The small salad radishes are remarkably easy to grow. Find a sunny open spot with fine, weed-free soil and watch them grow. Sow in intervals to ensure a steady and continuous crop and harvest whilst still firm and crisp with the leaves still bright green. White radishes require more attention than red ones, they need a longer growing season and patience is a virtue.

Salad radish such as the longer red French breakfast variety or round cherry belle can be served hot, either quickly blanched or rolled about in the meat juices of a roasting pan. But for me, I love to pick them at the absolute last minute, take them home, wash them and trim the leaves and eat with a little rock salt and/or butter. If the leaves are still quite young add them to a salad mix or eat them in their own right tossed in vinaigrette or cream and red wine vinegar dressing. The peppery roughness of the leaves is quite magnificent and a welcome respite from a standard cos or cut again salad. In Asian cuisine the white radish is often used as a garnish or sliced very thinly on a mandolin as a base for other foods to rest upon. Try marinating a slice or two in a mixture of dry soy sauce, fresh ginger and a little chili to accompany sushi or grilled seafood.