Wild or cultivated, watercress is an underrated vegetable with much to offer. Unlike some plants and vegetables that have changed in taste and appearance through years of cultivation commercial watercress has managed to retain the appearance and eating quality of its wild ancestor. 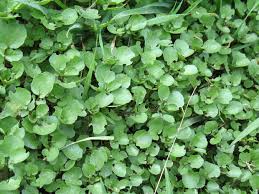 By virtue of its name alone the places to find wild watercress are by streams and waterways where it grows prolifically. Although it can be picked at any time of the year it is at its most abundant in summer and flowers beautifully from May to October.

A word of precaution when picking watercress, avoid picking from any streams, which are close to fields of cattle and sheep. Liver fluke can contaminate watercress, which is common in cattle but more especially sheep. Watercress from these parts can still be picked but needs washing and cooking to kill the bacteria whilst watercress found growing away from herds of cattle or sheep flocks can be eaten raw in perfect safety.

Watercress is most commonly used as a steak garnish but also makes a delicious soup, especially good with chunks of smoked haddock dropped into it. I like to use watercress as a salad dressing by simply mixing with olive oil and pureeing with a hand blender and then passing through a fine sieve. The peppery notes of the cress and olive oil give a salad a healthy kick-watercress is loaded with vitamin C.