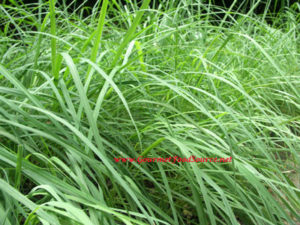 The lemongrass plant (also known as citronella) is a staple of many Southeast Asian soups and curries. It plays a leading role in the repertoire of Thai and Vietnamese cuisine in particular, imparting its heady citrus flavor into salads, soups and the ubiquitous green curries. Lemongrass is distinctively Asian, forget fusion, this is a powerful ingredient that will give your Asian food its authenticity so don’t use it to replace fresh lemon in a European dish, it doesn’t work. Although lemongrass is associated with Asian cookery it is also grown in Africa, Australia, South America and Florida.

Lemon grass can be sown from seed in a propagator or, if you can find a fairly fresh stick, which still has a little of the root crown attached then they will root quite easily. Whichever, they require warmth and water and will eventually grow into a large mound of bright green grass with a wonderful lemon aroma.

Lemongrass is generally sold ready trimmed. By that, what you get is the bulbous end of the plant, which is white in color with a tough outer husk. Remove the outer leaves and reserve for flavoring Asian stocks and soups. There are two ways to prepare lemongrass, either chopped as finely as possible or cut into wedges and dropped into soups such as Tom Yam Kung or Tom Khaa Gai from Thailand. The ends can be bruised with the back of a knife or hand and used to stir a soup or sauce imparting a subtle citrus note without overpowering the end result.